On 7 September 2021, the UK government made a major policy announcement regarding the funding of long-term social care.

This had been long-awaited. Many commentators have suggested that there’s a serious funding issue in the sector that needed addressing. Long-term care has long been a sensitive and contentious issue that has very much been a political football over the last 20 years.

Here’s all you need to know about these changes and how they could impact on you and your family in the UK.

Why long-term care is a key issue

According to the Office for National Statistics, a 66-year-old man has an average life expectancy of 85 years and a woman the same age has a life expectancy of 87. Furthermore, there’s a 25% chance of that man celebrating his 92nd birthday and the woman her 94th.

The same medical advances mean that we’re living longer with specific illnesses that previously would have limited our life expectancy.

Why is this relevant to you?

Even if you’re a British expat living overseas, you may have parents or other elderly relatives that are still based in the UK. That means you could well be indirectly impacted and it’s therefore important that you’re aware of the proposed changes.

Even if someone doesn’t need to go into residential care, there may well be domiciliary care costs if they stay living in their own home. For example, just a very basic care package involving a care visitor for two hours each day at £15 an hour will total £10,920 in a year.

State provision is primarily targeted at those in most need and unable to meet funding costs themselves.

The government has proposed a cap on lifetime social care costs

Up to now, if people have assets worth more than £23,250 then they must pay for their social care with no cap on the costs.

Under the new system proposed by the government, anyone with assets below £20,000 will not have to pay anything towards their care.

Those with assets from £20,000 to £100,000 and above will have to contribute, on a sliding scale. The amount they have to contribute will be dependent on a person’s local authority, which delivers most of their social care.

The government have confirmed that no one will contribute more than 20% of their assets each year and, once their remaining assets are worth less than £20,000, they would cease paying. However, they might still contribute from any income they receive.

Those with assets above the £100,000 threshold must meet all fees until the value of their assets fall below this amount.

The prime minister also announced a lifetime social care “cap” of £86,000, meaning that no individual will be asked to pay more than this sum for care in their lifetime.

However, you should be aware that the detail of the new plans suggests that the £86,000 cap is only applicable to care costs. The cost of accommodation is not included.

How the proposed changes will be funded

The government have flagged up three sources of funding for these changes:

1. A National Insurance (NI) increase for employees and employers

National Insurance contributions (NICs) for both employees and employers will go up from April 2022.

From that time, a 1.25 percentage point increase will be levied on employee and employer contributions.

For example, employees paying Class A NICs will see the rate they pay NI go up from 12% to 13.25% on the relevant band earnings. The higher NI rate of 2% will be unchanged.

Employers will see their Class 1 NICs go up from 13.8% to 15.05% between the lower and upper thresholds.

Initially, the extra amount will simply be included in NI deductions but, from April 2023, the money will be earmarked as a “Health and Social Care Levy” on payslips.

According to the Guardian, an individual earning a salary of £100,000 will see their annual NI contributions rise by £1,131.

A proportion of the money raised will be used to target NHS backlogs caused by the Covid pandemic. Once the backlog is cleared, more of the money will be devoted to social care.

For the first time, anyone who has reached their State Pension Age will pay NI (through the new Health and Social Care Levy) on any earnings. Contributions of 1.25% will commence in April 2023.

3. The tax on dividend income will go up

Alongside the rise in NI, Dividend Tax rates will also increase by 1.25 percentage points from April 2022. This change will mostly affect business owners taking income from their company in the form of dividends. 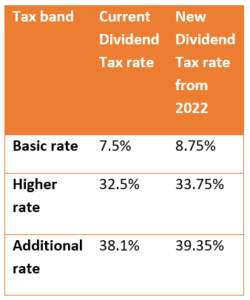 If you take home more than £2,000 a year in dividends, you will face a slightly higher bill regardless of your Income Tax band.

Under the current system, you may be able to claim some of the cost of long-term care provision from yourself or a member of your family from the NHS or the relevant local authority.

However, even with this support, it’s likely that if you’re relatively well-off, you’ll need to cover most of the £86,000 cost yourself, as well as any amount above that not covered by these plans.

Potential sources of financing care could include:

If you’d like to discuss how you, or members of your family, could be impacted by the increase in National Insurance or Dividend Tax, we’ll be happy to help.

Charlton House Wealth Management Limited is an Appointed Representative of Strabens Hall Ltd which is Authorised and regulated by the Financial Conduct Authority (reference no. 461795).